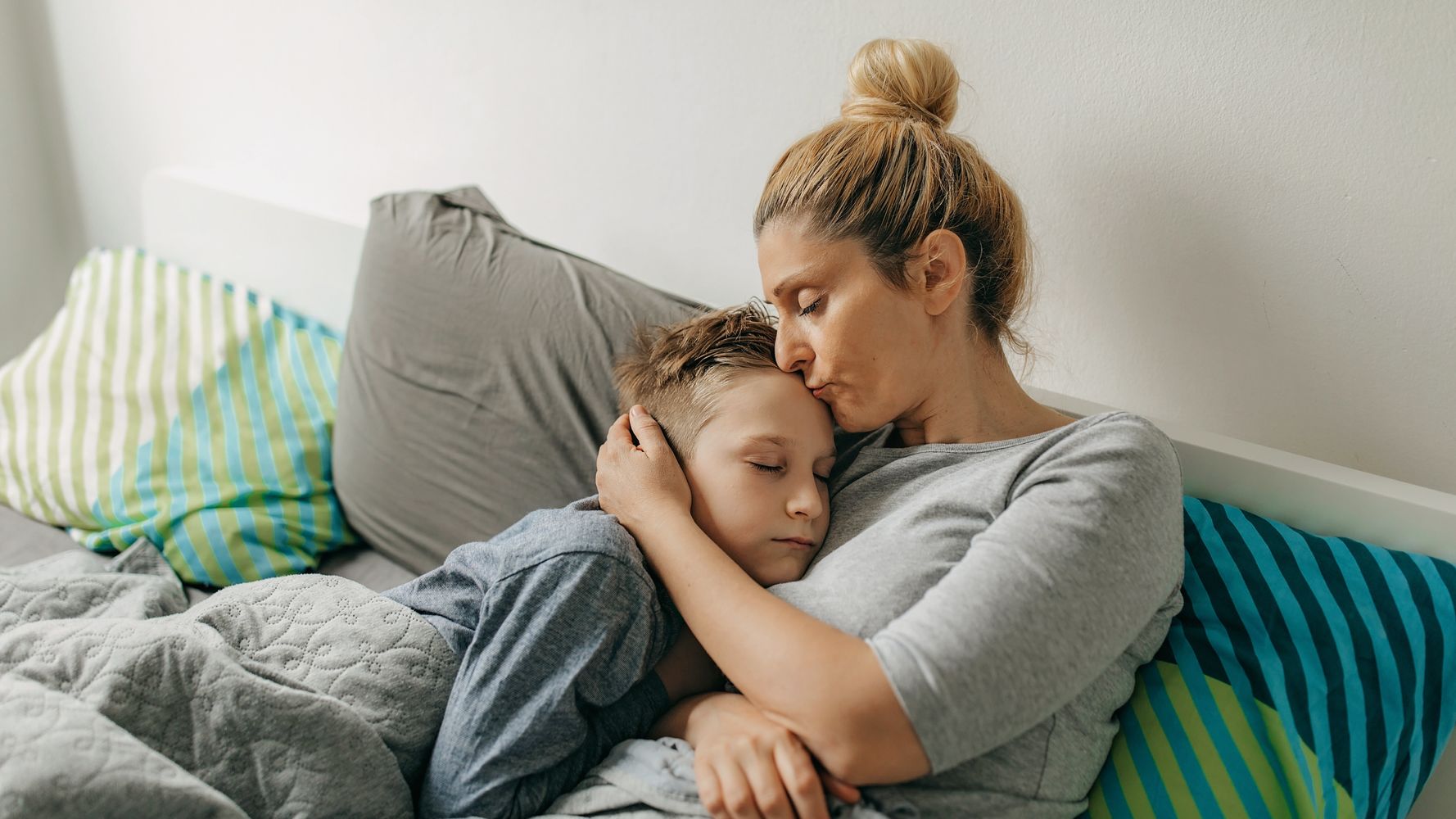 Many families embrace co-sleeping as a beloved nightly tradition, snuggling up close together at the end of a long day. For others, it’s more of a routine they fell into when their children were young and everyone was sleep-deprived, and they just never really changed things up as time went on.

So HuffPost Parents spoke with several experts about co-sleeping with older children and when to make a change, as well as some practical strategies about how to do it.

First, know that there’s no set age at which parents and kids ‘should’ stop sharing a bed.

Most parents probably don’t set out to co-sleep for life, but there are no hard and fast rules about when you “should” stop. (Despite the fact that overbearing friends, family members and even medical professionals might have something to say about it.)

“The way families choose to sleep is a really personal choice that’s influenced by a lot of factors, including people’s cultures and the way they were raised,” said pediatrician Dr. Kelly Fradin, who runs the popular Instagram account Advice I Give My Friends and who authored the recent book “Parenting in a Pandemic.”

“I think in the medical community sometimes we have a bias toward doing things a certain way,” she added, “but I think there’s a growing understanding that there are a lot of different ways to promote healthy sleep and family closeness.” (Fradin made a point to note that as a pediatrician, she does have safety concerns about sharing a bed with babies. That’s not what this story is about.)

All of which is to say: If sleeping together every night (or several nights a week) is working for everyone in the family, there’s no reason you should feel compelled to stop at a particular age.

But ask yourself: Is this working for me?

“Sometimes when you have multiple people in a bed, you can have deterioration of sleep quality and sleep quantity, which can have pretty serious repercussions,” said Fradin, who noted that is true for both parents and children. (Here’s some helpful information from the American Academy of Pediatrics about how much sleep children should be getting at night.)

When you’re looking at your current sleep arrangements, then, one simple first step is to ask yourself: “Is this something I’m doing for me, or my kid?” said psychologist Dr. Becky Kennedy, who offers online courses on children and sleep struggles.

Basically, you want to have an honest check-in about whether sleeping together is getting in the way of the kind of sleep — and personal time — you really need and want. Then go from there.

Check in with children to make sure it’s working for them.

If you’ve been sleeping together for a while, your child may not necessarily feel like they can tell you they want to make a change without hurting your feelings. Or they might not even recognize they’re ready for a change without a bit of prompting from you.

“Make sure your children feel comfortable saying if they want more privacy, so that you can respect and support that when it comes up and if it comes up,” Fradin said.

That’s also true of children who may have started sleeping with you more regularly during the COVID-19 pandemic, as many parents have reported, but who want to get back into their more typical routines at this point.

It may be helpful to frame it as part of a larger discussion about how they’re feeling at home these days. You could say something like, “As you’re getting older, we should make sure our home is set up to support you,” Fradin suggested. That gives kids the opportunity to open up about broader changes they’re hoping to make in their space and routines, and while you may not always accommodate them, it’s a good way to start a discussion.

And be sensitive to the fact that these can be difficult conversations for some kids to have, because their reasons for wanting a bit more space may be related to growing up and approaching puberty.

“As our kids are getting older and approaching adolescence and puberty and coming into changes in their bodies and feeling more adult than childlike in those ways, having some privacy at night is developmentally appropriate. To change into pajamas, to figure out how they like to sleep, to explore their bodies however they want to and feels comfortable,” said Kennedy. “Those are all things that can’t be done in the presence of a parent.”

If you’ve been co-sleeping with your child for years, you should expect some resistance when you decide to make a change.

“Remind yourself so that you can say it to your kid that two things are true: ‘This is going to feel hard, and we can all do it,’” Kennedy said.

Maybe you’ll get lucky and have a kiddo who can go from sleeping with you regularly to just moving into their bed basically overnight, but don’t expect that to be the case. Instead, start by asking yourself what a middle ground might look like, Kennedy urged.

“That could be when your child starts to sleep in his own room, put a picture of yourself. Put a note with a calming mantra next to your child’s bed,” she suggested. Or maybe you tell them you’re going to sit on the floor next to them in their own bed as they fall asleep, then you gradually move out. Perhaps they sleep on a sleeping bag in your room for a stretch, then you camp out in their room. The internet is awash with suggestions, and unfortunately there isn’t one magic one-size-fits-all solution for every family.

One simple tool that Kennedy says makes a big difference with the families she works with is giving children a mantra.

Respect the fact that they might feel really nervous about separating. Say, for example, your child’s name is Max. You might teach them to say something like: “‘Mommy is near, Max is safe, your bed is cozy,’” Kennedy said. And since the transition might feel hard for you as well, you could benefit from repeating a similar mantra.

Stick. To. Your. Boundaries.

Alas, there is no getting around the fact that if you’re looking to make changes to your family routines and habits, you are just going to have to put in the work, night after night. (Of course, if you think your child is struggling with separation anxiety or fears that warrant a closer look, absolutely talk to your child’s pediatrician.)

Don’t allow yourself to be caught off guard when your child inevitably pops up in your room in the middle of the night, Kennedy said. That’s often when parents give in, and it can feel really challenging emotionally if you’re not ready for it. Instead, anticipate that your child is going to have some problems with this, she urged, and know they’re probably going to come in during the night. Validate your own feelings of frustration and fatigue that will arise around that.

Then stick to your plan. And know that it’s never too late to change habits, though it might take some time.

“A lot of times parents can feel their heartstrings tugged when their child wants to be in their bed,” Fradin said. “But children when it’s firm and consistent tend to adapt really well to limits, even when they’re changed.”

45 Funny Tweets About Parents’ Responses To ‘Where Do Babies Come From?’

When can we stop wearing face masks?
High-powered MRI detects subtle differences in the hippocampus of people with Down syndrome
50 Beautiful But Hard To Pronounce Baby Names
A ‘dose of hope’? Fact-checking President Joe Biden’s first speech to Congress
Amazing High School Hacks And Crafts That Every Student Should Know
Follow us on Facebook
Follow us on Twitter