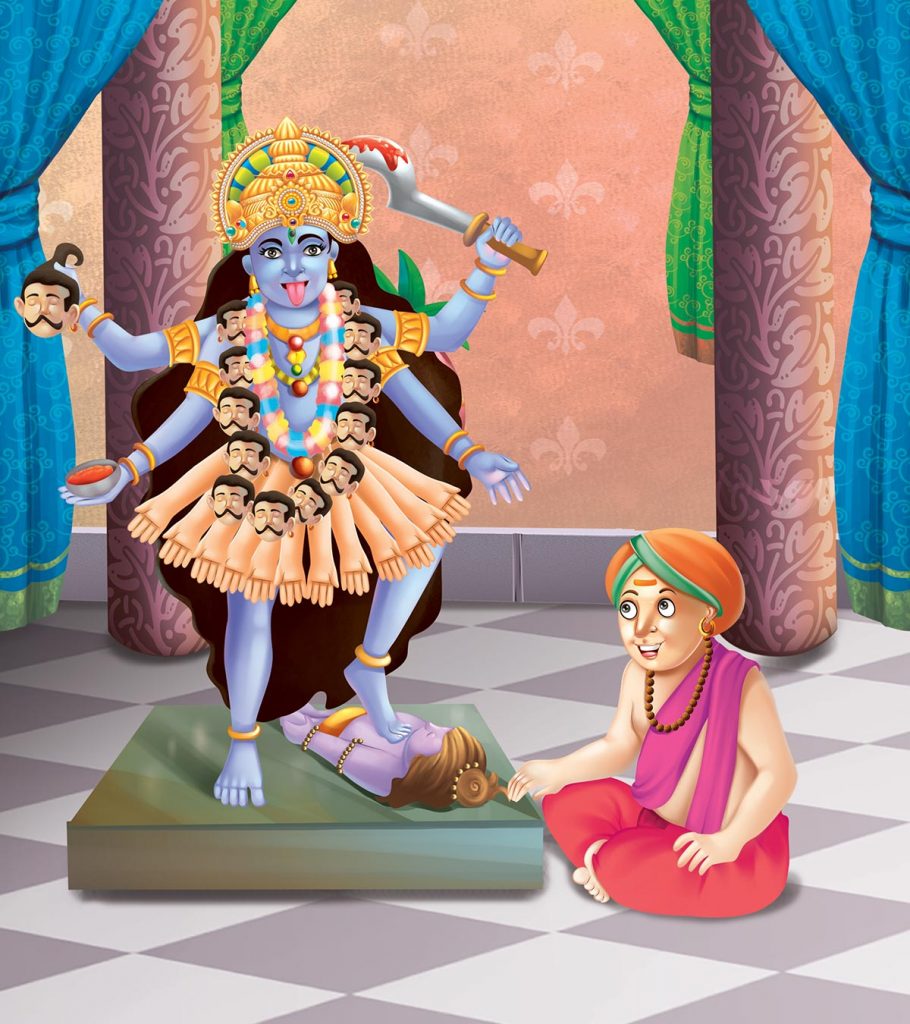 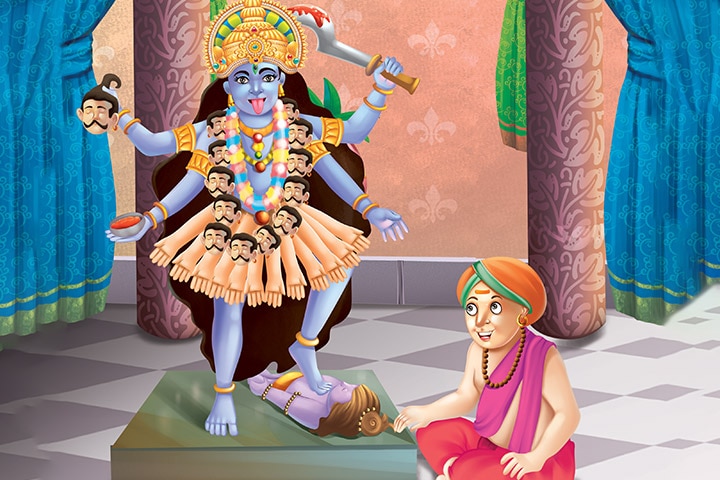 Tenali Ramakrishna was born in Thumuluru in the southern part of India. Legend has it that although he did not receive any formal education, he became a great poet because of Ma (goddess) Kali’s blessings. Here is the interesting story behind it.

One day, a great sage visited Tenali Ramakrishna’s village, and everyone in the village went to seek his blessings. Looking at Ramakrishna, the sage predicted that he would become a great poet.

He told him, “Rama, I will teach you an ancient mantra. Recite this for 1,008 times in the goddess Kali temple on the outskirts of the village. The Ma would appear and grant you wishes.”

Rama went to the goddess Kali temple the next morning. He sat in front of the idol with his eyes closed and recited the mantra for 1,008 times, with utmost devotion. After some time, he heard a voice calling him, “Rama, Rama.”

Ramakrishna opened his eyes, and in front of him was goddess Kali, with all her 1,000 heads and multiple arms! Suddenly, Ramakrishna began to laugh uncontrollably. Puzzled, the goddess asked, “Why are you laughing, Rama? What is so funny?”

Ramakrishna apologized for his behavior and said, “Oh, Kali Ma, I was thinking about what would happen if you catch a cold, and imagined you sneezing with all your thousand noses.”

Goddess Kali too laughed at his joke and said, “Rama, I like your sense of humor. I have come to grant you wishes. Look! I have two bowls in my hand; one contains sweet milk. Upon drinking it, you would acquire great knowledge of the world. And the other bowl contains curd, which would give you wealth. But you can choose only one bowl, so think carefully and pick one.”

Rama stayed silent for some time thinking, and then replied, “Kali Ma, can I taste both before drinking them?” The goddess agreed and gave him both the bowls. Before the goddess Kali could realize what Rama was doing, he drank from both the bowls.

The annoyed ma said, “Rama! Why did you drink from both the bowls and disobey my orders?”

Rama bowed his head and replied, “I am sorry Ma Kali,  but what is the use of knowledge without wealth, and what would I do with wealth without knowledge?”

Moral of the story

Fortune favors the bold. Always do the right thing, and do not hesitate to speak your mind.