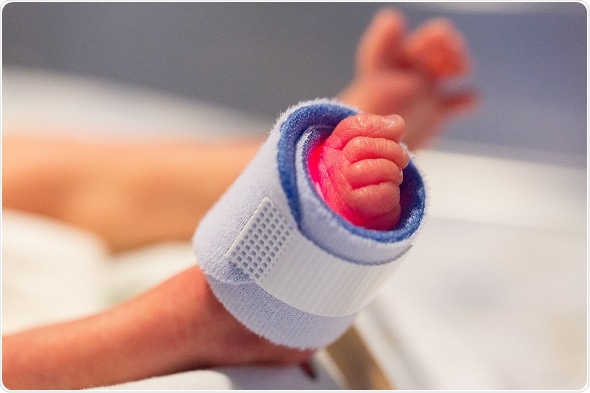 A multidisciplinary team of scientists from Granada has warned for the first time of the presence of bisphenol A (BPA) and parabens (PBs) in a wide range of plastic medical devices, fabrics, personal care products (including topical creams), and nutritional supplements in hospital neonatal intensive care units (NICUs), coming into direct contact with new-born babies.


For this study, the researchers analysed over 50 items that come into direct contact with babies born with a very low birth weight, during their stay in hospital. Photo credit: SeppH (pixabay.com)

An article published today in Environmental Health Perspectives (the most prestigious journal in the world in the environmental health field) explains how the researchers analyzed over 50 items that routinely come into direct contact with babies born with a very low birth weight, during their stay in hospital. They warn that such babies are inadvertently exposed to BPA and PBs by various means—transdermal, digestive, respiratory, intravenous, or parenteral. Exposure to these two endocrine-disrupting compounds has been linked to a number of dysfunctions that lead to different diseases in both children and adults.

Among the items analyzed in the study were plastic syringes and tubes for the intravenous administration of fluids or parenteral nutrition; plastic nasogastric and enteral feeding tubes; oxygen masks and endotracheal tubes; and a wide range of cardiopulmonary bypass circuits, dressings, bandages, and electrodes. Other specific baby products were also analyzed, such as personal care products, certain fabrics, nappy-changing mats, and mattress protectors.

The study found that 60% of the objects or products sampled contained BPA, while PBs were found in 80% of the items. The highest BPA content was detected in the three-way stopcock (> 7,000 ng/g), followed by the patterned transparent film dressing (surgical tape), the gastro-duodenal feeding tube, sterile gloves for professional use, the umbilical catheter, and the intravenous infusion extension kit (with BPA concentrations ranging between 100 and 700 ng/g).

The researchers also observed high concentrations of PBs (greater than 100ng/g) in several items, such as the protective eye covers used when administering phototherapy to the baby, the aforementioned patterned transparent film dressings (surgical tape), intravenous catheters, and the intravenous infusion extension kit.

When they analyzed the hormonal activity of the samples taken from the selected materials, based on estrogenicity and anti-androgenicity assays, the items presenting the most hormonal activity were the dummy, the three-way stopcock, and the patterned transparent film dressing.

Analysis of the NICUs within hospitals in Granada

This study was conducted by a multidisciplinary group of clinical researchers from the “Virgen de las Nieves” university hospitals (whose NICU and new-born population were analysed) and from the “Clínico San Cecilio de Granada” hospital, together with researchers from the University of Granada (UGR), the Biomedical Research Centre (CIBM), ​​and the Biohealth Research Institute in Granada (ibs.GRANADA). The research was funded by the Instituto de Salud Carlos III and the European Union.

Nicolás Olea, Professor of Radiology and Physical Medicine at the UGR and a doctor at the San Cecilio Hospital, is the main author of this study.

New-born babies with low birth weight, require the complex care of the NICU setting, which endeavors to simulate uterine conditions until the baby’s immature skin begins to develop correctly and their gastrointestinal, immune, nervous, and respiratory systems start to function properly.”

In this hospital environment, such babies are subjected to multiple techniques and procedures that involve the use of medical instruments and devices that come into direct contact with their bodies, many of which are made of polycarbonate plastic, epoxy resins, or PVC. Substances such as BPA form part of the structure of these materials or have been added to improve the characteristics of the product.

“In addition, parabens are used as components of some plastics as preservatives or antimicrobial agents. They are also used in cosmetics and other consumer goods. Both BPA and PBs can be released when these materials are used, either due to wear of the plastic polymer or by being exposed to the very pH and temperature conditions that foster their release,” warns the UGR Professor.

To date, only two other studies have addressed the exposure of new-born babies in the NICU environment to these chemical compounds, and both identified an increase in BPA concentrations in the urine of the babies that was linked to a higher frequency and intensity of the use of these medical devices. Values ​​up to 30 times higher than those found among the general population were reached.

Higher levels of PBs were also described in hospitalized new-borns in relation to a greater use of medications, although no other possible sources of exposure were identified, in contrast to the study that is now being published.

The authors signal an urgent need to implement preventive measures to offset babies’ exposure to these endocrine-disrupting compounds BPA and PBs, including both changes in clinical protocols and also the use of materials free of endocrine disruptors.

Not surprisingly, the authors of this study are now developing new work protocols and procedures designed to reduce the exposure of babies to these and other environmental factors in the first weeks of life during their stay in hospital that may interfere with their normal development