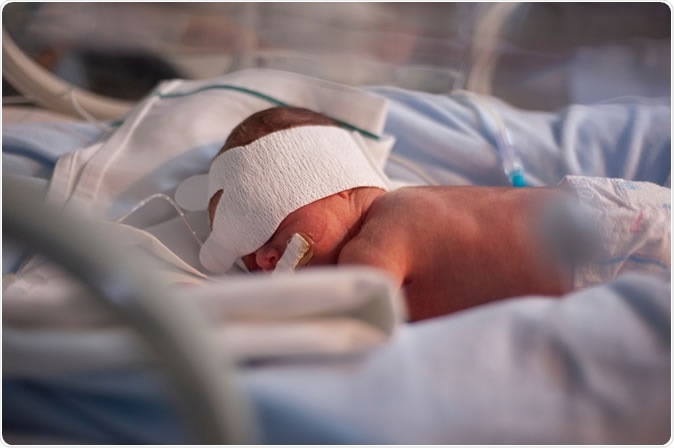 When a premature baby is born, the immediate challenge is to ensure it breathes easily without outside help. A new study shows that by carefully supplying 100% oxygen to these fragile scraps of humanity, independent breathing can be initiated much faster.

Hypoxia is the medical term for the lack of sufficient oxygen to the body. It both requires increased respiration and inhibits the natural respiratory effort. The scientist teams from the Netherlands and Australia have shown, in a revolutionary study, the use of oxygen to deal with the issue. The research paper is published in the journal Frontiers in Pediatrics.

The breath of life

Preterm infants almost always need to be helped to maintain an adequate level of oxygen in their tiny bodies, because they are more floppy than normal, and their lungs aren’t mature at birth. If the baby doesn’t breathe on its own at birth, all kinds of interventions become necessary, starting with a face mask supplying oxygen and ending in intubation for mechanical ventilation. This is always a difficult thing for the frail new life, and doubly so when the baby is preterm into the bargain.

However, since lack of oxygen inhibits normal breathing, and especially so in premature babies, the need to support breathing is a critical one. In the vast majority of situations, a non-invasive face mask is preferred, through which oxygen is supplemented. If the baby gets enough oxygen this way, the doctor is spared the need to follow through with more complex procedures that carry a higher risk of lung and brain injury. However, the question is always there: how do we get the preemies to start breathing spontaneously so that the face mask can be useful?

The study was motivated by the theory that the administration of pure oxygen in the first few moments after the baby’s birth would stimulate deeper and faster spontaneous breaths. The researchers wanted to confirm the hypothesis experimentally before trying out the technique on human babies.

The first paper deals with the fundamental preclinical investigation for this procedure. Researcher Janneke Dekker’s team took 26 preterm rabbit babies (kits) which were not breathing properly. They divided them into two groups, both of which were put on non-invasive breathing assistance immediately after birth. One group was put on 21% oxygen to simulate atmospheric oxygen levels, while the other was on 100% or pure oxygen.

To test these results in humans, Dekker adapted the same technique for use in prematurely born human babies. There were 52 babies overall, divided into two groups for immediate care at birth, and then rapidly assigned to two treatment groups. One group got 30% oxygen by mask, while the other got 100% oxygen from the beginning. The scientists used pulse oximetry to assess the blood oxygen levels and compared the results to those that are internationally recommended as reference values. This comparison was used to keep the blood oxygen within acceptable limits by adjusting the oxygen flow through the mask.

The findings were as they expected. The preemies that received pure oxygen breathed more regularly and more often and maintained a higher oxygen level in their blood. They were also found to require less positive pressure ventilation on average. The scientists conclude that giving pure oxygen to these babies helped them get more oxygen to their vital organs and tissues, helping them survive better and function normally. This aided their development so that they could be weaned off assisted breathing devices much faster.

The researchers stress that earlier studies have shown the detrimental effects of over-oxygenation in babies. This can lead to hyperoxia, which can lead to oxidative damage to sensitive tissues. As a result, it’s not as simple as just switching on a stream of pure oxygen for every premature baby. Instead, the current study used a carefully titrated stream to match the excess oxygen to the baby’s needs, reducing the percentage of oxygen as the baby matured and showed signs that it could survive with less oxygen.

The take-home is that using pure oxygen carefully to stimulate spontaneous  breathing in premature babies, while following them up diligently to reduce the excessive oxygen levels once they are able to manage with less, could help many babies who can’t breathe on their own at birth.

This trial was not a clinical protocol. Instead, says Dekker, “this clinical trial was not designed to demonstrate any significant differences in clinical outcomes, but rather provide knowledge on one of the factors that could improve breathing effort at birth.” The researchers now plan to refine their technique to develop a full-fledged care protocol which can be used clinically to compare with current practice in terms of outcomes.

And the findings offer scientific pleasure independent of any clinical benefit, according to the journal’s chief editor Arjan te Pas, who says, “The finding that oxygenation is a dominant driver for breathing effort at birth is exciting as this offers the possibility to be more successful in supporting preterm infants in a non-invasive manner. The knowledge gained from this research could help us design future studies on improving the effectiveness of the use of oxygen at birth, without increasing the risks that are associated with hyperoxia.”