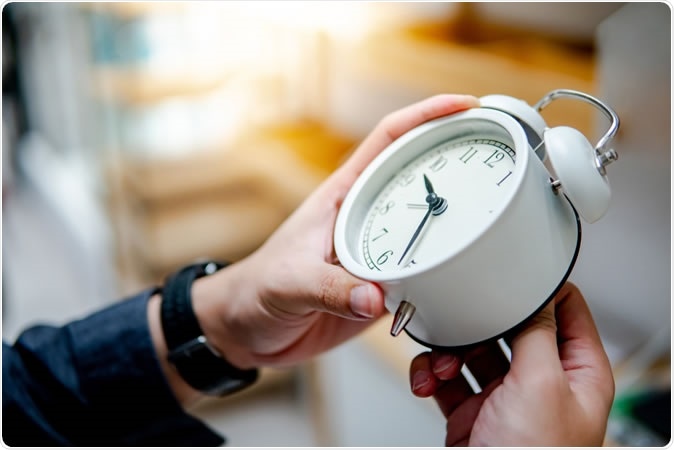 Every year people make a change in their daily timetables to make use of what is called “Daylight Saving Time” (DST), and then transition back again to their earlier time clocks. However, new research published in JAMA Neurology shows that this yearly change about may affect health over the long term. The researchers strongly call for stopping this practice, which has no economic benefit, and may have severe and chronic negative health impacts.

DST is a nationwide resetting of the clock one hour ahead in March, on the second Sunday, and one hour back on the first Sunday in November. It was borrowed from Europe, first coming into play in 1918, but was later abolished, only to make a return in 1942. The Uniform Time Act (1966) made it a nationwide policy but with statewide exemptions being allowed.

The arguments in favor of DST had to do with saving current by preventing artificial lighting and rescheduling travel timings, among other factors. But a 1974 Department of Transportation study showed minimal benefits from DST. This was confirmed by the 2008 figure of 0.02% reduction in energy consumption due to DST.

However, there is a significant lack of consensus between the understanding of the biological maladaptation caused by DST and the political understanding of its economic advantages. While many US states want to make DST a permanent occurrence, others are looking into returning to standard time. In fact, Tennessee has already passed a law to establish DST as a permanency. However, such legislation will need to be approved by the Congress as well.

How does DST affect health?

DST is important in its effects on the biological clock via its elimination of bright morning light. This light plays a vital role in entraining the circadian or physiological body rhythms. Research has shown a higher rate of strokes caused by lack of blood supply, and a smaller increase in the risk of heart attacks, during the first two days of the transition. The effect is more marked in women, older citizens and cancer patients. Some possible reasons include loss of sleep, sympathetic overactivity, and inflammatory signaling. Overall wellbeing is also negatively affected by DST, especially for men and full-time workers. The adjustment appears to be particularly difficult in the spring.

The average loss of sleep due to the spring change to DST, where the clocks fall back, is about 15-20 minutes in adults. High school students showed a reduction of about 30 minutes sleep on weeknights. Though this may appear to be a minimal loss, it is associated with a possible increase in risk of fatal accidents, probably due to underlying sleepiness, slower reactions, and lapses from alertness. The loss of half an hour of sleep in adolescence (for whom 8-10 hours are recommended, by the American Academy of Sleep Medicine) is likely to aggravate behavioral issues, reduce the attention span, worsen learning issues, depress the mood and produce higher self-harm tendencies.

Many people do not realize this, according to researcher Beth Ann Malow who specializes in neurology and pediatrics with respect to sleep disorders. They think of the transition as occurring over a day or so. Not so: it throws the biological clock out of gear as well.

Malow clarifies: “It’s not one hour twice a year. It’s a misalignment of our biologic clocks for eight months of the year.” She discusses this concern in an expert commentary that provided an overview of several big epidemiologic studies which have concluded that there is a strong case for ending this traditional resetting of clocks.

Genes play a vital role in regulating the circadian rhythms, which in turn affects the sleep-wake cycles by a self-feedback loop. With changes in sleep time, many peripheral genes are expressed differently. Even a short transition, as occurs with DST, may result in alterations in the epigenome, that is, functional groups attached to the outside of the DNA strands, which change their rate and mode of expression. Sleep changes also change the way these fundamental circadian rhythm genes are transcribed. This leads to deep changes in the functioning of the organism.

The researchers suggest that in people who already have sleep-wake disturbances due to abnormal circadian rhythm regulation, or have brain disorders, or whose brains are still immature, as in children and adolescents, the imprint left by this sudden and arbitrary resetting of outward time schedules without a corresponding resetting of the internal body clock can cause them to suffer more severe ill-health.

The maladjustment with the circadian clock occurs primarily with people who have a more fixed internal rhythm. Such people are extremely sensitive to differences between biological and chronological time. In fact, some children with autism, according to Malow, take weeks or even months to make the transition. Autistic children are often very routine- and schedule-oriented, which may indicate a fixed internal clock.

Malow warns of the need to understand how deeply DST affects physiological functioning. She warns, “When we talk about DST and the relationship to light, we are talking about profound impacts on the biological clock, which is a structure rooted in the brain. It impacts brain functions such as energy levels and alertness.”