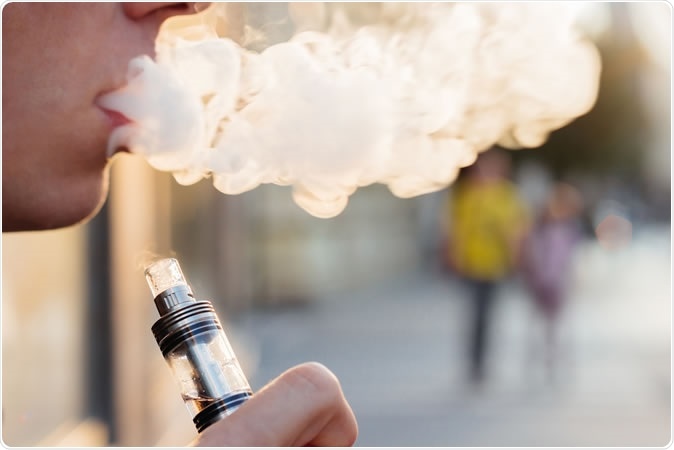 A new study released today reveals that adolescents who use e cigarettes may be at a greater risk of using addictive substances instead of regular flavouring. The study was published today in the latest issue of the journal American Journal of Preventive Medicine.

This new study refutes the previous claims and says that three in four teenagers who use e cigarettes with flavouring regularly may step up eventually to use nicotine, marijuana and other mind altering substances of abuse in their e cigarettes. This is a warning, say the researchers, for policy makers to curb e cigarette use among teenagers and youth.

According to researchers Hongying Dai, PhD, Associate Professor, College of Public Health, University of Nebraska Medical Center, Omaha, NE, USA, who was part of this new study, “Our study provided a more nuanced view of youth e-cigarette use behaviors than earlier studies. We found that youth were more likely to report vaping nicotine and marijuana than ‘just flavoring’ only, and that cigarette smoking intensity was associated with an increasing proportion of students reporting vaping nicotine only.”

For this study the team included 14,560 teenagers. The patterns of their vaping was examined. They were asked to report on questionnaires on their e cigarette and flavour use over the past 30 days. The data came from 2017 Monitoring the Future (MTF) cross-sectional study.

Results revealed that 12 percent of the teenagers had used e cigarettes in the past 30 days. Of these 7.4 percent had used nicotine in the vaping fluid and 3.6 percent had used marijuana. Within the vapers, only 24.9 percent were using simple flavouring in their vaping fluids. The rest were thus using marijuana, nicotine and one or more other substances that altered perception.

The team wrote that over the past couple of years there has been an exponential rise in use of e-cigarettes among the youth of the United States. This is mainly due to the popularity and aggressive marketing of the nicotine salt and pod-based products such as JUUL. JUUL and other brands of e cigarettes have a large variety of flavours for the teenagers and youth to choose from and this lures them in say the researchers. Fruity and candy flavours are more popular among the younger ones, they write.

This new study follows two previous studies in the Journal of the American Medical Association that had found that one in four teenagers in the United States, in high school have at least tried vaping once in their life time. The report had said that the teenagers in high school find the fruity flavours such as mango, mint and menthol flavours of the e cigarette fluids most appealing. Following this e cigarette maker JUUL had announced that they would stop making the mint flavoured products. This was in November 2019.

Another study in the journal Pediatrics came from the American Academy of Pediatrics (AAP). The study revealed that ninety percent of the teenagers were using flavours of fruits, candy and other non-traditional flavours (traditional flavours were nicotine and menthol). Those using the non traditional flavours initially were also more likely to continue vaping at six months follow up found the study (64.3 percent). Fruity and candy flavour use was also associated with heavier use, they had reported.

The US Surgeon General had issued an advisory in the 2018 warning about the harm that these e cigarettes can cause to users especially the youth. Since then there has been no reversal of the trend of use warn the researchers. There have been numerous reports of long term lung damage caused by vaping as well as case reports of acute lung injury as a direct result of vaping. Acute lung injury due to vaping has led to hospitalizations and even deaths in the users, they warned. The team says that these studies should alert the policy makers to raise awareness and curb the use of e cigarettes among the youth.

Mohammad Siahpush, PhD, College of Public Health, University of Nebraska Medical Center, another researcher on this team said, “Continuous surveillance of youth behaviors and strategies and interventions to reduce youth e-cigarette use are needed. The truth is that no form of tobacco is safe.”