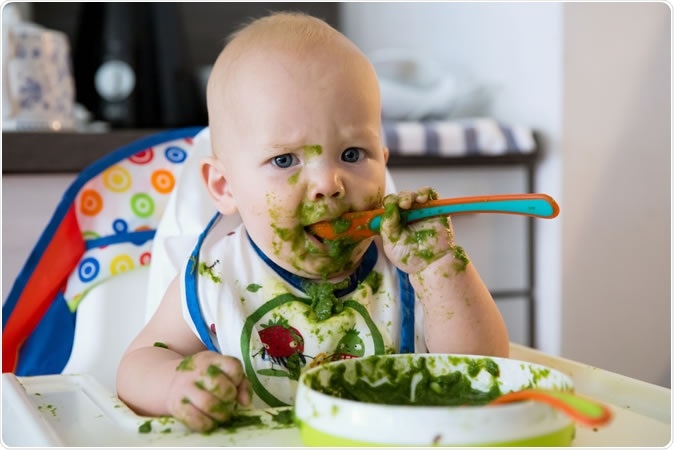 How young do you have to be to escape the lure of unhealthy foods? It’s never too young, finds a new study published in the Journal of the Academy of Nutrition and Dietetics on November 14, 2019. The researchers found that over 60% of babies below one year of age, and almost 100% of toddlers (up to 2 years), ate foods with added sugar. This indicates a serious and pervasive habit of introducing unhealthy food habits extremely early in life, when they have the chance to take hold and influence lifelong eating patterns and food addictions.

The research followed up on an earlier study that showed that children aged 6 years who had had any beverage to which sugar had been added before their first birthday had twice the risk that they would have at least one sugar-sweetened drink every day, compared to those who had not. Other studies have established that children over two years old who had added sugar in their diets were more likely to have cavities, asthma, obesity, high blood pressure and abnormal blood lipids.

This study is the first to look at the intake of sugar by infants and toddlers. It will hopefully provide a sound basis for more studies in this age group that will make health organizations and clinicians more aware of this issue, and stimulate proper guidelines for the use of sugar among the very young.

The researchers retrieved data from the NHANES (National Health and Nutrition Examination Survey) database from 2011 to 2016. This is a national-level sample study carried out every year by the CDC (Centers for Disease Control and Prevention). To analyze the data, they first classified foods using information in the Food Patterns Equivalents Database as well as the list of What We Eat in America, maintained by the US Department of Agriculture.

They then calculated mean consumption in these age groups, excluding sugars from breast milk and infant formula. They looked at snacks, treats, yogurt, baked goods, drinks, and candy, besides sugar itself.

They found that on average, infants had one teaspoon added sugar a day, which forms about 2% of the daily calories eaten. Toddlers had about 6 teaspoons added sugar, which comes to about 8% of calories per day. Boys and girls seemed to have the same average sugar intake, irrespective of family income and of whether the family was headed by men or women. However, the least added sugar was in Asian toddlers, at 3.7 teaspoons, possibly reflecting their cultural practices in baby feeding. Black toddlers had the highest sugar consumption at 8.2 teaspoons a day.

Most of the sugar came from the sources listed above, but in toddlers fruit drinks were the chief culprits, while in infants, flavored yogurts were to blame.

Weaning foods are one potent source of added sugar, since this is when the infant transitions from a diet composed solely of milk to common foods eaten by the family. This change is a large one and can have an effect on nutritional status, the development or expression of food preferences, and resulting food patterns. For parents who don’t have much experience with this important period, doctors could be an important resource in deciding how and which solid foods are to be introduced to the baby.

The nutrition label on most weaning foods is an important weapon in the fight to avoid overexposure to sweets and sugar during the formative years of life. In January 2020, it will be mandatory to put the percentage of added sugars on the Nutrition Facts label, but it is already present on many labels. Websites like http://www.cdc.gov/nutrition are useful tools to help understand the best way to nourish babies and toddlers.

Ruling out sugary drinks like flavored milks as well as low-calorie sweetened beverages, they say any beverage with added sugar is better not given to a child. This includes many beverages that are marketed to target children, contain added sugar, but are not really of any particular nutritional benefit. Instead, they advise, give breast milk, infant formula, plain milk and water as suitable drinks for children.

Added Sugars Intake among US Infants and Toddlers Herrick, Kirsten A. et al. Journal of the Academy of Nutrition and Dietetics, https://jandonline.org/article/S2212-2672(19)31340-1/fulltext